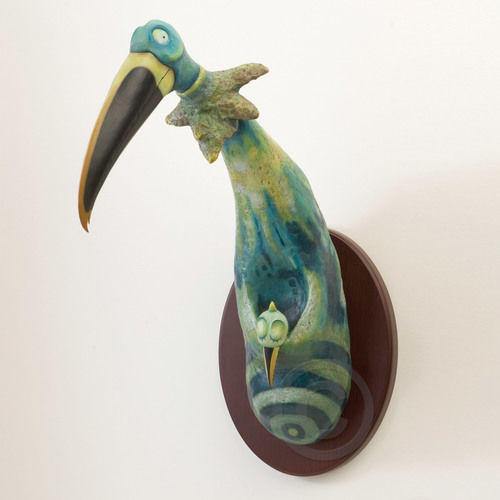 Have you seen our Dr. Seuss Collection?

The fledgling Springfield Zoo was a beloved part of Dr. Seuss’s childhood. If his father wasn’t able to accompany him and his sketchpad there, he would go with his mother or his sister, Marnie. Only later, when Ted’s dad became the superintendent of parks, did he also become an unexpected resource, who now aided and abetted his son’s artistic efforts. Zoo animals that had met their demise lived on as their bills, horns, and antlers were shipped to Ted’s New York apartment to become exotic beaks and headdresses on his bizarre taxidermy sculptures.

The result was an astounding 17 sculptures—created during the 1930s—which remain today as some of the finest examples of his inventive and multidimensional creativity. Marnie, who from the beginning had witnessed the genesis of sculptures for The Seuss System of Unorthodox Taxidermy, described Ted’s home and its “occupants” on November 28, 1937 for The Springfield Union: “They have a charming apartment on Park Avenue, New York, but it is so filled with his animals that I am apt to have a nightmare whenever I visit them.” On the other hand, the June 7, 1938, issue of Look magazine dubbed Ted Geisel “The World’s Most Eminent Authority on Unheard-Of Animals.”

Dr. Seuss’s inimitable Collection of Unorthodox Taxidermy will, unquestionably, continue to be one of the most sought-after gems from his diamond mine of artistic treasures.