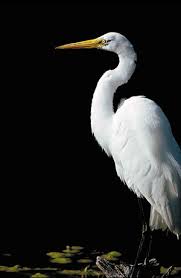 We have a favorite Great Egret we like to call “George”. You can often find “George” checking the bushes for a snack.

Did you know that the Great Egret was nearly wiped out in the United States in the late 1800s, when its plumes were sought for use in fashion, the Great Egret made a comeback after early conservationists put a stop to the slaughter and protected its colonies; as a result, this bird became the symbol of the National Audubon Society.