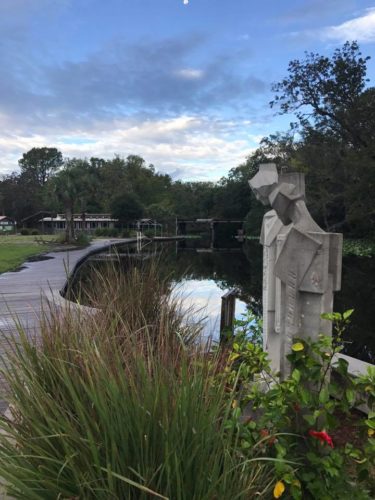 What are those statues?

We are often asked what the statues along the river mean!

Much like the Phoenix bird which rose from its own ashes, the Sprites of Midway Gardens were resurrected from their demise and given to the Arizona Biltmore, A Waldorf Astoria Resort as gifts. Now called the Biltmore Sprites, the Sprites of Midway Gardens were in a sense the lost children of architect Frank Lloyd Wright and sculptor Alfonso Iannelli. These geometric architectural statues were conceived in 1914 for the specific purpose of adorning and watching over Midway Gardens, once a center for premier entertainment, fine food and music on Chicago’s lakefront.

Most of the Sprites met a premature and unfortunate demise during Prohibition.

The Gardens, designed by Mr. Wright, experienced a successful first season in 1914, but that same winter began to feel the chill of World War I in Europe. Midway Gardens was sold to the Edelweiss Brewing Company and turned into an overgrown beer garden — while the Sprites stood by and watched.

Mr. Wright’s well-planned architectural designs and decorations were altered and defaced in an effort by the brewing company to attract an audience. This effort proved unsuccessful. The final blow came in 1920 when Prohibition was declared. Since the open-air patios and the enclosed Winter Gardens were far too visible to be converted to a speakeasy, ownership of the Midway Gardens continued to change hands several times, serving once as a garage and a car wash. The building was finally closed and demolished in October 1929.

Midway Gardens was bulldozed into Lake Michigan. It should be noted, however, that the building didn’t go down without a fight. Two wrecking companies went out of business trying to demolish the concrete structure. The company that finally took it down still lost a considerable amount of money on the job. The Chicago Daily News of October 10, 1929 reported the destruction of the Gardens as the end of an era, but commented that the golden days were so remote they were truly beyond recapture.

It seemed the Sprites were lost forever. Then sometime after World War II, word reached Taliesin, the original estate and Frank Lloyd Wright School in Spring Green, Wisconsin, that a few of the Sprites had been saved and were lying in pieces in a farmer’s field in Lake Delton, Wisconsin.

Apparently, a member of the Midway Gardens wrecking crew either rescued the Sprites from the lake or snatched them before they were destroyed. For years they had lain in his farm field. Taliesin recovered the three damaged Sprites and shipped them to the Stillwater, Minnesota home of Don Lovness, a client and friend of the Wright’s. Lovness and his wife restored two 5 to 6-foot Sprites and a 12-foot Sprite. For over 20 years, these figures guarded their Frank Lloyd Wright-designed home.

In 1980, Mrs. Wright built a garden at Taliesin West and had the Sprites shipped to Phoenix for placement. After restoration and recasting work was done, eight Sprites, each standing 6 feet tall and weighing 450 pounds, were donated to the Arizona Biltmore in October 1985. Today, the lost children have found a welcome home in the familiar surroundings of a Frank Lloyd Wright-inspired premier establishment, The Arizona Biltmore Resort.

Bill &  Mary Weinaug purchased these replicas of the Original Sprites at the Arizona Biltmore.